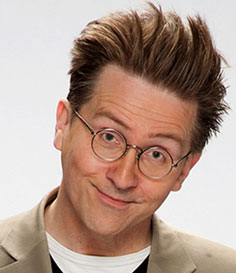 A master at connecting audiences through shared humor, and redefining motivation as connection. Tim has spent a lifetime of helping people learn and laugh.

Tim has developed a dynamic compound, redefining “motivation” as connection and trust, creating the perfect blend of laughter, thought and inspiration for every keynote he delivers. Tim’s style reflects the chaos and speed in with which we now work and live.

Discovering his greatest inspirations from a collection of worst practices and fabulous failures, this instructive ringleader has mastered the use of humor as a tool. Compelling, unique, interactive, and fun, Tim has brought forth inspiring and engaging experiences for audiences at conferences, conventions, management gatherings, client appreciation events, and educational in-services and staff days.

Tim unites Millennials, GenXers and Boomers alike in an unforgettable encounter, his energy underscoring and reflecting the realities of this over-stimulated and distracted emailing, Facebooking, Tweeting world in which we now find ourselves living and working.

Tim managed to carve out a comedy career on the national circuit, working with many well-known comics such as Jerry Seinfeld, Steven Wright and Larry Miller. And Tim’s standup can be heard alongside those and others on XM/Sirius Satellite Radio’s comedy channels.

In 2005, his stage play “Leaving Iowa” premiered at Jeff Daniels’ Purple Rose Theatre Company during which it received a nomination for American Theatre Critics’ award for Best New Play in the country, was soon thereafter published and is currently performed in theaters all over the U.S. and Canada.

So it turns out that comedy, improv, writing, directing and teaching are not such strange bedfellows. Tim has synthesized his calling as a thought leader in motivational speaking, reinventing conferences one funny experience at a time. As he often says, “If you want them to hear it, tell them. If you want them to remember, make them laugh.”

Tim has been privileged to speak before such notables as former President George H.W. Bush and economist Paul Krugman and continues to expand his role as a speaker and facilitator, magnifying the art of connection and extolling the virtues—and what Tim feels is the necessity—of finding Comfort in Discomfort.

Plans are well under way for this year’s auction at the 43rd Annual PSRFA Conference. Keeping with the theme of Refresh Renew Rebuild we are looking to past auctions to make this one even better than ever for the futures of the children and families we serve.

We recall the many auctions with not only baskets but also the items that were the handcrafts and the treasures from each area of our state. We are looking to showcase these types of articles at this year’s event. We know many people with amazing talents attend our conference. This is your opportunity to show those talents off and help a great cause. In the past there were quilts, paintings, woodworking handcrafts, and flower arrangements to name a few. We remember gift certificates to various venues and attractions. The sky is the limit! We are asking for donations from everyone to assist with the auction. With your help we will be on our way to Refresh Renew and Rebuild!

All donations and items can be brought to the conference with you. We are excited to see many familiar people and looking forward to many new faces at the conference!

As in the past, all proceeds will go toward the PSRFA Scholarship Fund. Please help us make this fund grow with your assistance and donations.